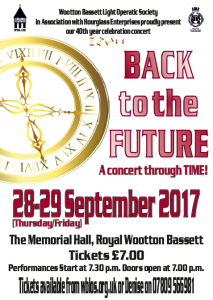 The 40th Anniversary concert, whose title is “BACK TO THE FUTURE”  was on 28th and 29th September 2017.  It was a mixture of songs, sketches, crazy comperes and time travel.

Our two comperes, acting as tour guides alongside the Captain and the First Officer, took the audience back and forth across time to visit some memorable music in WBLOS’s forty year back catalogue of shows.  There was engine trouble, mishaps and much music along the way.

The concert included ten solo numbers, two sketches and six chorus numbers including one from the WBLETS production of JOSEPH AND THE AMAZING TECHNICOLOR DREAMCOAT.