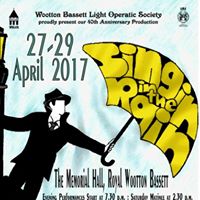 Congratulations to all involved in a great 40th Anniversary show.  There are two brilliant albums of photos on our Facebook page:

NODA came to the Saturday Matinee, and provided the following report:

‘Singing in the Rain’

Thank you for your kind invitation to review your recent production of ‘Singing in the Rain’.   It was lovely to be able to join you for this show in celebration of your 40th anniversary.  Congratulations!
Basing a stage production on a film musical must be risky, although I am aware that this show has been performed quite often in the past.  Changing from the film format of short sequences, seamless changes of scene and fast action to fit a staged production would need care and extensive planning.  This production met many of the challenges with aplomb, creating wonderful silent movie sequences using the cast members and recreating the radio broadcast studios with great attention to detail.  I liked the mock sound desk used in the second Act that doubled as a box office and stage door caretaker’s office.
The director, Marion Aspell, had clearly planned the production with great care.   There were 14 scenes in the first Act.  Here, good use was made of the different areas of the stage by way of lighting, curtains and screens. The mood and era of the production was established for the audience on entering the venue, as the front of house people were nicely dressed in 1920s costume. Much of the design of the production worked very well, with the reporter introducing both main characters and crew at the outset.  The freezing of characters while parts of their personal history were acted out was good.
The scenery worked well, although some of the set changes were not as efficient as they might have been. I liked the details such as the set painters onstage, the depiction of the quiet mayhem that is the nature of a film studio and the radio studio with its old-style microphone and wooden table.  The use of multiple set of steps made good use of the different levels, but were a bit noisy underfoot.
The music group, directed by Richard Adams, was positioned upstage, behind a screen, allowing them to keep in touch with the action on stage easily.  When the main curtains were closed, the music was a little muffled, but throughout the music was well played, with good choices of timing and volume.  The piano playing for the mime was beautifully done!
The sound was good, well balanced between the orchestra and the actors. The lighting was very well set up for this production, although there were some less well-lit areas at times, and low lighting during the lamppost scene.  Perhaps a little leeway on the reality of the darkness of a rainstorm would have been good here. However, on the whole the lighting was good, with creative use made of the spotlights.
The costumes were excellent, with good attention to detail.  The outfits for Kathy Selden were very good, making her fashionable but not brash, whereas Lina Lamont was wonderfully over the top in her costumes. The costumes for ‘Beautiful Girl ‘ were excellent.
The choreography for many of the numbers was inventive and well suited to the cast, with the tap dances fitting easily into the storyline. What an asset you have in your leading man being a tap dancer!
Altogether, the technical aspects of the show were well prepared and put together. With the lead characters well suited to their parts and acting with imagination and energy, this production had all the elements required to be a great success.

All the smaller parts were crucial to making this production both believable and enjoyable.  This you did with great thought and care, and the ‘minor’ characters were each important to the whole performance.  For example, the diction and singing teachers were lovely cameo characters, while the crew of the movie set acted their roles with great honesty.  The dances and the chorus numbers were well performed and the fun that was had onstage clearly spilled over to the audience, especially in the final number.
This was a tricky show to stage but this company performed it to good effect. At times, there were a few gaps in the fluid transitions from one scene to the next, but with such talented lead characters, the success of the production was almost guaranteed. The denouement of the story in the revelation of Kathy singing the song for Lina’s mime was very well done!
It was a thoroughly enjoyable afternoon of entertainment and I was only sorry to have to hurry away and not speak to anyone afterwards.

Please note that these comments reflect only the personal views of the representative, and solely relate to the performance seen.

There were individual comments too.

SINGIN’ IN THE RAIN

Screenplay By Songs By

Based on the classic Metro-Goldwyn-Mayer film, by special arrangement with Warner Bros. Theatre Ventures, Inc.

This amateur production is presented by arrangement with JOSEF WEINBERGER LTD.

on behalf of MUSIC THEATRE INTERNATIONAL of NEW YORK